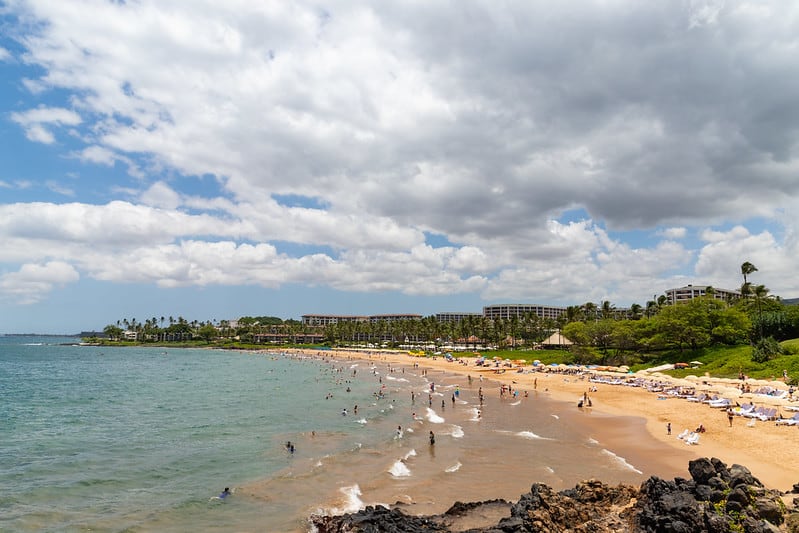 Grand Wailea is one of the most popular resorts in Hawaii, a luxury resort nestled in 40 acres of tropical rainforest with Wailea Beach in the background. While many people head to Grand Wailea to unwind by the nine pools or the ocean, its tennis courts, beach yoga classes, and scuba clinics cater to active guests. Grand Wailea is also perfectly situated for runners who want to work up a sweat outside the grounds. Here are nine of our favorite places to run close to Grand Wailea.

The Wailea Beach Path showcases five beautiful crescent beaches. A boardwalk follows the 1.5-mile path, so it's an easy route for runners of all fitness levels. You'll appreciate the sturdy boardwalk around Makena, where the sand is very soft. Don't be afraid to step off around Wailea Beach, where the sand is usually firmer underfoot. The boardwalk can get crowded, especially during the peak summer tourist season. If you want to run at pace, it’s best to set off early before travelers arrive and the sun gets scorching. Look out for whales when running from November to May.

The boardwalk ends at Mokapu Beach, but your run doesn't need to. If you're still in the mood for exploring, continue north for another 1.5 miles to Kamaole Beach Park. The route is more varied, with developed sidewalks, dirt trails, and the sandy Keawakapu Beach. However, the different terrains just make it even more exciting. The coastal views and cool sea breeze can help you stay motivated as you wind your way around the water's edge.

Leave Grand Wailea and drive around 10 minutes north to leave the tourists behind and reconnect with nature. The Lahaina Pali Trail, near Kihei, is a nearly 5-mile out-and-back track that keeps runners, hikers, and bird-watchers coming back. If you're staying at Grand Wailea with your pooch, feel free to bring them along. They'll need to stay on a leash, but they'll love the challenge of the rocky terrain. While it's not an especially long trail, the uneven ground makes it best suited to runners with moderate to high fitness. Long sleeves offer great protection when the winds pick up.

The Kalama Park Loop is another great coastal running spot around 10 minutes north of the resort. The park is very popular, with basketball and tennis courts, a skateboard park, and picnic tables attracting crowds. However, if you don't mind sharing your space, you'll appreciate the well-kept 1-mile paved concrete loop. Most sections are at least 5 feet wide, so there's plenty of space to pass pedestrians and other dog walkers. It's also pretty flat most of the way around, so don't worry if it's been a while since you pounded the pavement.

The appeal of running along a beach trail never gets old. This track sounds foreboding, but it's pretty easy with just a few steep downhill sections when you're running west. Wear good runners with plenty of grip as this is a gravel and rock trail rather than a paved path like many local beach tracks. At a little less than 0.2 miles, it doesn't take a lot of stamina to take it on.

Head 10 minutes south of the resort for a more relaxed beach experience. While it's relatively close to the resort, the Pu'u Olai Beach Trail is far more discreet. While it's called a trail, it's not a developed path like many beach trails. Instead, you'll have to make your own way through the volcanic rocks. Despite the lack of development, it's an easy out-and-back trail of less than a mile. While the Pu'u Olai Beach Trail is open to human guests all year round, dogs aren't welcome.

The grassy fields make this 0.6-mile beachfront park loop a little different from many of Maui's coastal running trails. It's not a developed track, but navigating the flat grassy and sandy surface that takes you around the park's perimeter is a cinch. It's a peaceful park spot with enviable ocean views. If you arrive in the early morning, you may be lucky enough to see one of the local turtles. If you work up a sweat, cool off in the ocean before returning to the resort.

You don't have to be on two wheels to appreciate Mokuele Bike Path near Puunene, around 23 minutes north of Grand Wailea. At a little over 13 miles, it's ideal for enthusiastic runners who want to tune the rest of the world out and get into their running rhythm for a while. The path runs along the Piilani/Maui Veterans Memorial Highway, but with a clearly painted line dividing the bike path from the motorway and just five road crossings, the cars shouldn't worry you. The path is usually 6 miles wide, so you can comfortably share it with cyclists.

At around 30 minutes drive from Grand Wailea, Wailuku Heights Cross is the furthest running path from the resort on this list. However, it's so beautiful that we couldn't resist sharing it. Moving far from the resort makes it less crowded than closer routes, even in the middle of the day. Make sure you're fit enough to handle it, though. While it's only a 1.5-mile out-and-back track, managing its steep elevation takes at least moderate fitness. The picturesque mountain views at the peak are worth the climb. Just pay attention to the loose soil as you make your descent.

With a branch conveniently located in the Grand Wailea Resort, the team at the biostation is confident it knows the best running routes in the local area. However, we're always happy to learn more. If you've discovered another great place to run around Grand Wailea, we'd love to know about it. Drop us a line or tell us about it next time you visit Grand Wailea Resort's Mohalu Spa.

Wailea Beach Park Maui, Hawaii by dronepicr is licensed with CC BY 2.0

Best Places for a Sunrise Run In Ft. Lauderdale, FL

Where To Boat Watch in Fort Lauderdale, FL

Eating right can make a dramatic difference in how you function and feel....

Best Places for a Sunrise Run In Ft. Lauderdale, FL

If you enjoy running, you might agree that there’s no better way to...

Where To Boat Watch in Fort Lauderdale, FL

Fort Lauderdale, Florida, is known for its beaches and all sorts of fun...